From 1941 to 1970 the area was a privately owned swimming pool and picnic ground known as “Greenlanes” and well supported by the general public. 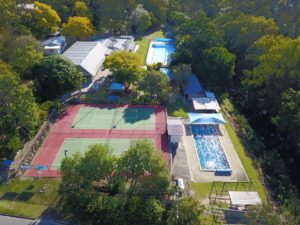 In 1970 a local community committee was established under the guidance of Mr. Bill Scattini, solicitor. The site was purchased for the establishment of a member owned style country club. Hence, The Taylor Range Country Club Limited was born in August 1970.

The Club’s name is taken from the mountain range directly to the north, being part of the Taylor Range, while behind is the D’Aguilar Range. The Club itself is situated in the area once known as Bayley’s Gap, being the way Cobb & Co. once went from Brisbane to Ipswich, winding their way along Waterworks Road to the reservoir (Lake Enoggera), skirting the lake to Gold Creek, on to Lake Manchester then west to Ipswich.

The first stop for the coach after leaving the City of Brisbane, being the “Half-Moon” tavern/hotel previously situated just up on Waterworks Road.

In the early days of Brisbane’s settlement members of both the Turrbal and Jagera people were known to live in peace in the area and because of the abundant supply of water in Enoggera Creek the area was later used for growing vegetables and strawberries.

Since becoming a Country Club many facilities have been added including the building of the Squash Court Complex (opened in October 1977). The 1974 Floods submerged the bottom changing rooms and filled our bottom pool with sludge. The damage led to another pool being constructed inside the original. Flood mitigation works to the Enoggera Reservoir have now stemmed the flow of the creek, which now only runs for a short time after rain.

The Club is home to many local organisations and the variety of sporting and social activities they bring helps to give a warm family feeling. Members guests are warmly welcomed.

Mike Wilson has been the manager at Taylor Range since 2000. Having previously traveled extensively when serving in Her Majesty’s Royal Marines Mike lived in Scotland for several years whilst studying Leisure Management at Abertay University. A keen sportsman Mike played semi-professional football on arrival in Australia before hanging up his boots in 2008 and taking on the sport of triathlon in 2013. This culminated in his selection for the Australian age group team at the World Multi-Sport Championships in Denmark, 2018 & the World Triathlon Championships in Switzerland, 2019. Mike enjoys family time and he and his wife Anne have two children.